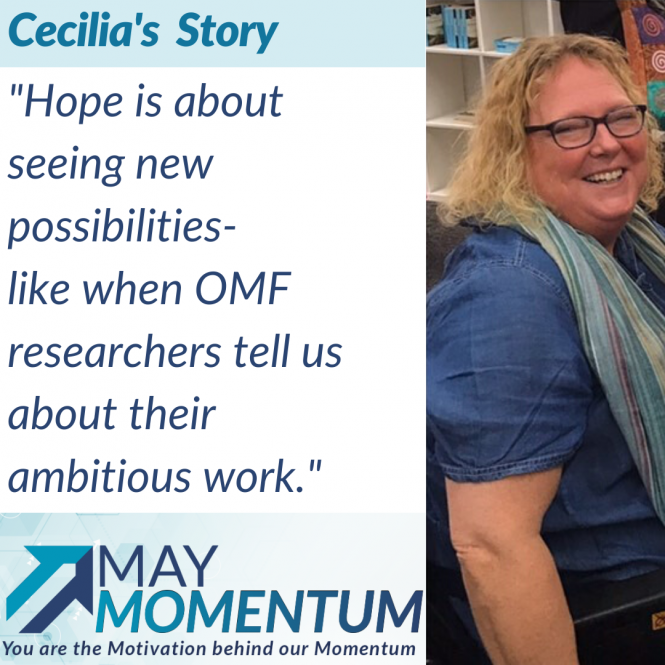 My name is Cecilia Ekhem and I live outside the town of Sundsvall in Sweden with my husband and one child at home, and one adult child.

I am unfortunately very tightly connected to Myalgic Encephalomyelitis / Chronic Fatigue Syndrome (ME / CFS). Rather, ME / CFS loves the connection to my body, but the affection is not mutual. I fell ill in March 2012 and found out about ME / CFS at the end of 2013. I haven’t been able to work since 2012 and need to lie down most of the day. I can leave the house now and then, but it comes with a cost (PEM) so I have to be careful. With many precautions (Like staying in bed 90% of the time) I am sometimes able to travel.

So when OMF’s founder & CEO/President Linda Tannenbaum came to Sweden in 2017 I was able to take my mother and son to Stockholm to meet her.

2014 was a time of despair for me. However, I read about The End ME / CFS project and immediately felt that this was something to build my hope on. I decided to start fundraising for OMF and have done that since then, in different ways.

I have no formal role in Team OMF, but I wrote poems for Motivational Monday in the beginning. I have been selling my poetry, initiated a fundraising concert for OMF, and I try to tell others about the great research. Now the amount my friends, family, and followers have donated has passed $10,000, and I have plans for a new OMF fundraiser in September.

Hope is about seeing new possibilities, like when brilliant OMF researchers tell us about their ambitious work. Hope is seeing other people fundraise and raise awareness as well.

Hope can also be about finding joy in the little things when everything feels dark, and like the future is coming too slowly. It’s OK to lose hope for a moment and acknowledge the grief that chronic illness brings. Once the despair fades, new hope will always come.