In a recent podcast about politics –  The Parliament Restaurant (Stortingsrestauranten) – the Prime Minister of Norway, Erna Solberg was interviewed.

Erna Solberg reflected on being in a position of power, and chose ME / CFS as an example of how she can use that power to be of influence. 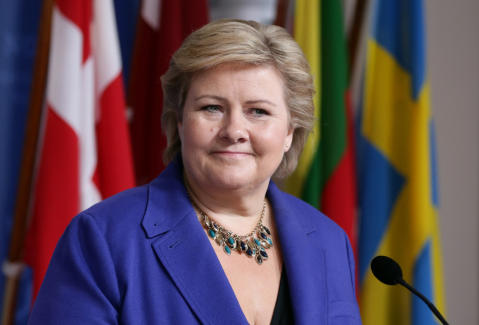 On the same day the podcast was recorded, she had participated in the announcement of an allocation from the Norwegian Research Council to four medical studies on ME / CFS.

In the podcast, Prime Minister Solberg says that ME / CFS is a cause she previously worked a lot on before she became a prime minister, while working in the committee for Health and Care Services at the Parliament. According to Solberg, this is a patient group who has been very badly treated in the health care system. She says there has been a lot of arguments about the cause of ME / CFS and what it is, and that a lot of suspicion has been thrown on the patients. For instance, that parents have pathologized their children or that it’s been a psychological problem instead of a physiological. The debate derailed, she claims. Not just in Norway, but in many other countries as well.

Erna Solberg states that as a principle, we should prioritize path-breaking, pioneer research projects. But we must also pursue what society requires – where needs aren’t met. We must do basic scientific research to get answers.

Now the government has been able to prioritize funds for user-identified ME / CFS-research through the Research Council. 30 million NOK has been allocated to research on ME / CFS. This means we can begin to dig into the more difficult aspects and maybe establish more knowledge for the future on why some people get ME / CFS, what ME / CFS really is and how we best can treat it, she continues.

Erna Solberg says this may sound like a nerdy little thing, but really there are hundreds of children lying in their beds at home without going to school and who loose years of their education. There are also a lot of grown-ups lying in dark rooms not really receiving much help or treatment. It is actually a big group who has received far too little attention, she claims. For her, it is rewarding to see that it is possible to move this forward. This is an example of an area where she has used her power as prime minister, she concludes in the podcast.

This is not the first time Erna Solberg speaks on behalf of ME / CFS-patients. Earlier this year a report was released in Norway on how many children were absent from school due to ME / CFS. The report was made from the Prime Minister’s initiative. The report revealed that about 270 primary and secondary students with ME / CFS did not participate in education. There are reasons to believe the numbers are even higher due to lack of reporting. Erna Solberg used this opportunity to raise awareness about ME / CFS in the media and emphasize the need for more research and better care for this patient group.

In 2015, on the international ME / CFS Awareness-day 12th of May, the Prime Minister participated as a guest of honor at an art exhibition arranged by ME / CFS-patients. There she stated on national television:

“It’s actually a scandal. The patients have met a lack of respect simply because we haven’t had knowledge. The worst part is that we haven’t worked that hard to attain that knowledge.”

It is wonderful to see a powerful politician taking an interest in, and prioritizing this long neglected and devastating disease. More awareness and more funds for research are important steps towards a solution. Let’s hope even more politicians and state leaders will join Erna Solberg’s involvement for ME / CFS-patients.