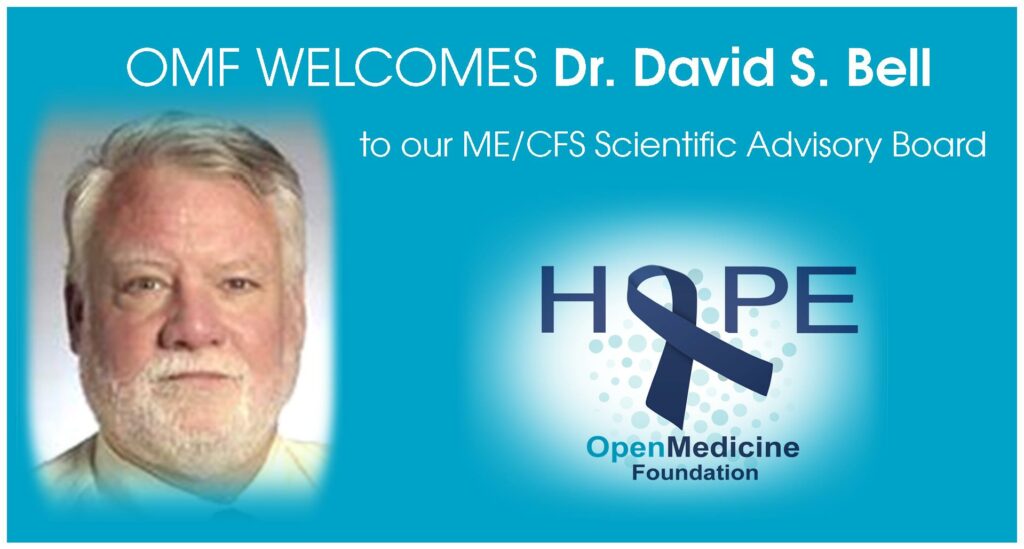 We’ve got lots of researchers, many of them leaders in their fields. But seeing the disease close up adds an important understanding that can be attained by no other way. This is why we are excited to announce another experienced and world-famous doctor to our ME/CFS Scientific Advisory Board, David Bell, MD.

Not only does the retired Dr. Bell know the disease, he has done his own research on his ME/CFS patients and collaborated with others in their research. His long history (since an outbreak in Lyndonville in the mid-1980s) also allowed him to make clinical observations that even newer experts may not have, yet.

“I am thrilled to become part of the open medicine foundation for several reasons,” said Dr. Bell. “First and foremost is that in the many years I have been studying the illness, there has not been the commitment to it by the state of the art science, and that has been mainly because of scientific apathy and/or lack of funds. But the Open Medicine Foundation is starting with the understanding that ME/CFS is not going to reveal its mysteries without real science. It is my hope that I can add to the overall effort with my clinical perspective.”

In the mid-1980s, Lyndonville, a small town in Upstate New York, was the site of an outbreak of ME/CFS, about half of them being pediatric cases. Lost with no direction from the existing medical paradigms, Dr. Bell took to trying to figure out the cause by doing his own research.

This journey continues for him, despite his retirement from practice. Dr. Bell is often asked to give presentations to share what he has learned is true and not true about the disease.

At our request, Dr. Bell wrote a description of pediatric ME/CFS and gaps in pediatric research.

We believe the other scientists on our board will benefit from the extensive and intimate experience he has. Want to know some of what he has learned? We invite you to watch and listen to his latest presentation at an event in late 2015 that was sponsored by our organization: