Thank you for your support during #MayMomentum! 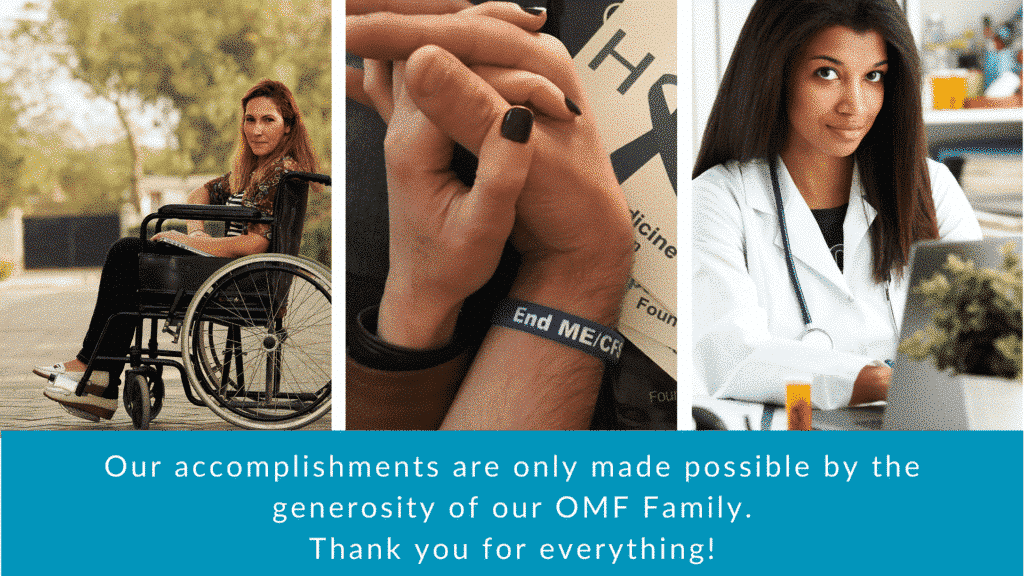 Thanks to our community’s generosity and shared dedication, our fourth annual May Momentum campaign was a huge success. Through individual donations and personal fundraisers on Facebook, Instagram, Twitch and other platforms, we raised over $175,000 for critical research into ME/CFS and related chronic, complex diseases!

We are so grateful to everyone who donated and fundraised on our behalf — the challenges are real, and the momentum continues because YOU are on our team!

Throughout May, we proudly announced new updates that give us reason to be hopeful:

Your contributions, small and large, add up to make a real difference in supporting these critical projects and a team of dedicated OMF funded researchers. On behalf of all of us at OMF, we are truly thankful for your belief in our mission to return millions suffering worldwide to the healthy lives they deserve. With you on our team, we will never give up until answers are found. Thank you for being a part of our OMF family.

Thanks to your touching reviews, Open Medicine Foundation has once again received a “2021 Top-Rated” Badge from GreatNonprofits.org!

OMF’s 2021 GreatNonprofits badge proudly demonstrates our commitment to transparency and serves to increase the visibility of our work and expand our network of generous supporters.

We are truly grateful to have received such moving responses from our community!  Thank you for supporting our mission to end ME/CFS.

View OMF’s GreatNonprofits profile and leave a review of your own. 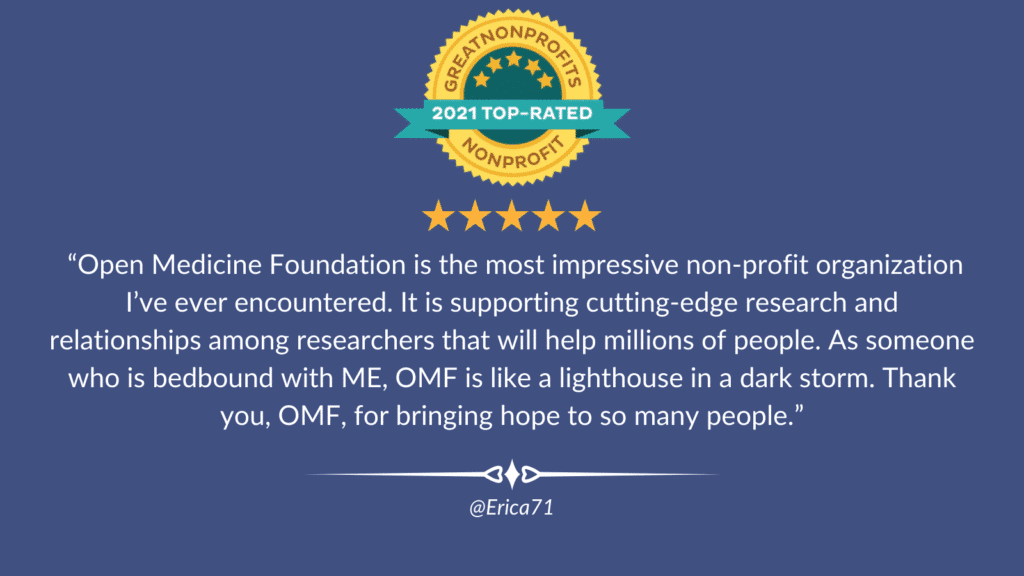 Use your cryptocurrency to help change the world!

In 2018, we received a $5 million Bitcoin donation from an extremely generous donor who wanted to help change the world. It transformed OMF forever, allowing us to launch our global collaborative research network. If you have Bitcoin, Ethereum or other cryptocurrencies, you can easily donate directly to OMF and receive a tax deduction, while significantly supporting the advancement of research to help millions of people impacted by chronic, complex diseases.

Open Medicine Foundation has the bold mission of solving and breaking the cycle of chronic, complex diseases such as ME/CFS, Post COVID, Post-Treatment Lyme Disease and Fibromyalgia. Vital to this mission is to financially support outcome-directed research at global centers that work openly, urgently, and collaboratively with each other and the broader research community, with the goal of translating findings to treatments.

Streamer lends a hand to OMF’s cause!

If you are a Twitch creator, you can now use your live streaming as a powerful platform for fundraising! OMF is proud to be a registered organization on Streamlabs Charity! 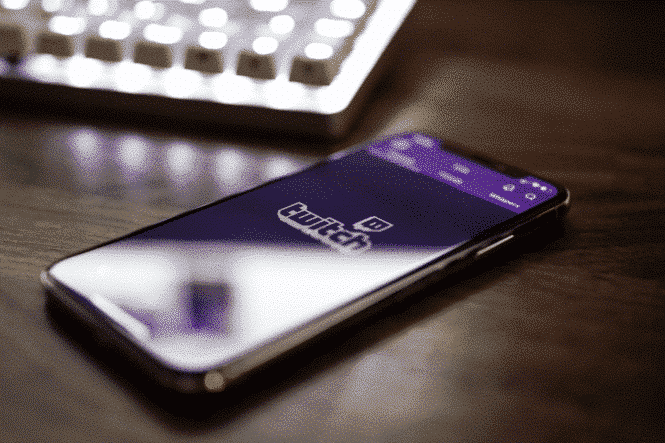 Today we are honored to profile one of our first Twitch fundraisers, Run by Patrick, from the UK. An ally to people with ME/CFS and Twitch content creator, Patrick shares what inspired his OMF fundraising efforts:

“Fundraising on Twitch is something I’ve done for around six months now. Every penny that I make through streaming on the site is given directly to the chosen charity of the month. OMF was suggested to me by one of my viewers and a fellow streamer. They are currently living with ME/CFS and made me aware of OMF’s incredible work. There was an outpouring of support for this charity from several others who watch my stream and have friends or family struggling with their day-to-day lives due to ME/CFS.

“I only became aware of ME/CFS within the last couple of years. One of my partner’s close friends has suffered from this disease for many years, causing them to miss several years of high school and rendering them housebound for long periods. Since then, I have met many people through streaming and online games who have a connection to ME/CFS, and hearing their stories inspired me to do what I can to help. I may not be the largest streamer, but I just want to do what I can to help OMF in their research.

“”ME/CFS is a disease that needs to be taken seriously. There are no approved treatment methods for this disease, but that doesn’t mean that the people suffering should be pushed aside until a cure is found. Education and awareness are so important. Family, schools, and friends should be aware of the issues faced by people with ME/CFS.

“With enough research, I truly believe a cure for ME/CFS can be found.
It’s just a matter of time.”

Today we share the story of a mother and daughter in Canada, the power of family, and their efforts to support critical research into ME/CFS. 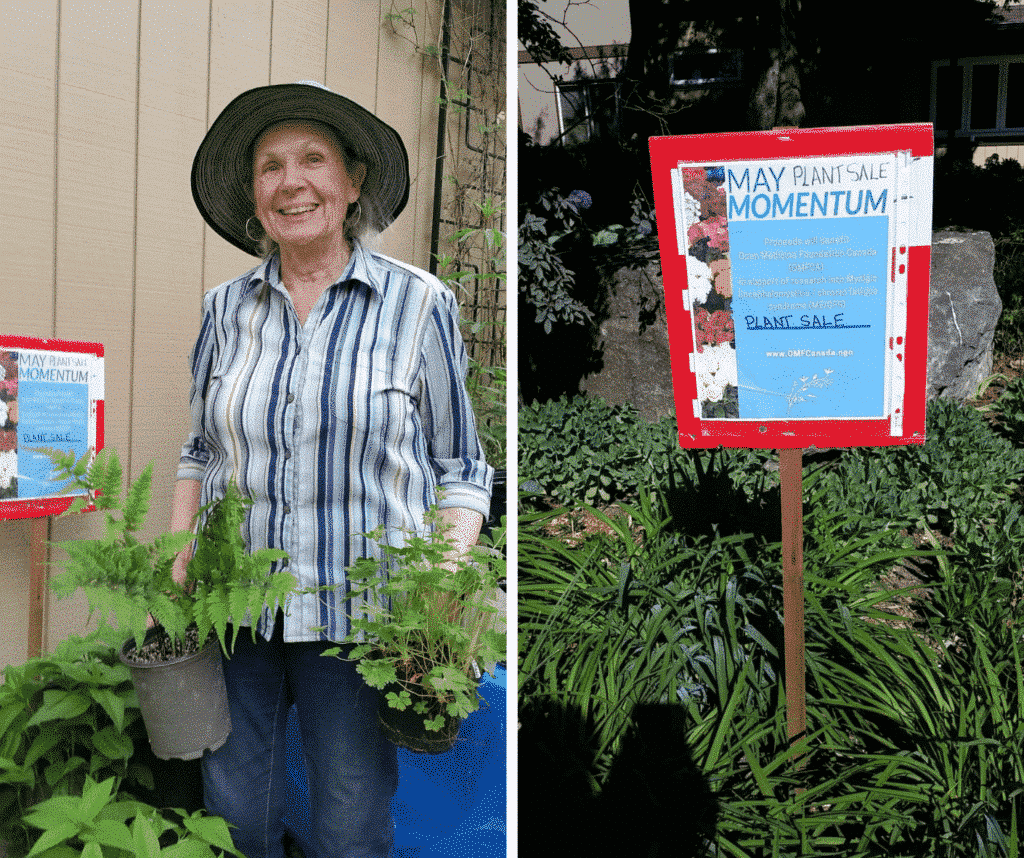 In 2017, Rebecca’s life was turned upside down when she came down with an illness that prevented her from leaving her bed and going to work. Soon after, she was diagnosed with ME/CFS. Over the next six months, Rebecca found herself completely confined to bed, sleeping up to 36 hours at a stretch. “I was barely awake, could not speak, or lift my head,” Rebecca explains. After the initial six months, she began to improve slowly. Although still primarily bedbound, on occasion, Rebecca can now watch a movie with her kids, shower, or send emails. “Never all three,” she explains. “I have to choose very purposefully how to spend what little energy I have each day. It makes life very slow.”

Rebecca’s mother, Margaret, soon came to realize the gravity of Rebecca’s illness. Margaret explains, “My biggest challenge was to learn how ill my daughter was. Rebecca would tell me how tired she was. I would reply, ‘Of course you are. You have a job and a young family.’ I found out later that Rebecca was not just tired; she was mentally and physically exhausted. Rebecca was going for many diagnostic tests, and all the results were negative. We had no answers. When doctors tell you that nothing is wrong, someone like Rebecca thinks, ‘It must be in my head. I have to fight this and keep going.’ This made her symptoms worse over time.”

Join our global network of donors and advocates by supporting OMF funded research today. Together, we can accelerate research and find the answers necessary to win the fight against ME/CFS and related, chronic complex diseases.