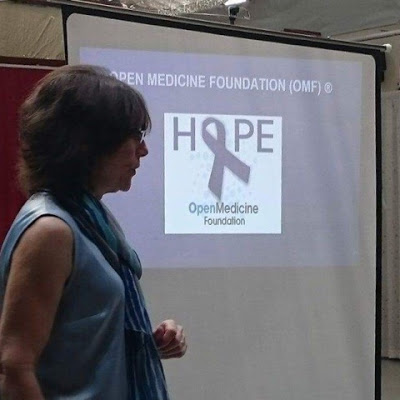 Camilla Gillberg, RME Sweden’s Secretary, reports from Member meeting held in Boras on Sunday, and also tells us when she met Linda Tannenbaum for the first time:

For 3.5 years ago, in October 2013, we arranged a membership meeting in Boras for RME West’s behalf. We would be visited by a woman from the United States who were starting to try to get more research into ME / CFS. At the meeting, we heard some very interesting information. Why ME-research does not have more money, how far the research had come and what this woman wanted to do.

The woman was Linda Tannenbaum and at our first meeting, she had just started Open Medicine Foundation (OMF).

Linda got in touch with ME / CFS, when her teenage daughter very quickly became ill.

“Eight o’clock when I let go of her at school, she was healthy, at a quarter past eight, she was not anymore, “explained Linda.

When Linda’s daughter was diagnosed, she began to investigate how far the research brought about ME / CFS and was dismayed by the result.

By the meeting of 2013, Linda found some ME-researcher, but it made her just frustrated.

“They did not talk with each other, so I invited a group of talented ME-doctors and a team of scientists to a meeting, put them around a table, took out a post-it notes and told them to start talking with each other.”

Last Sunday, I had the great privilege to participate once again at a members ‘ meeting in Borås, where Linda Tannenbaum told of OMF’s research into ME / CFS. Linda is as exuberant, enthusiastic, dedicated and engaging now that she was the first time I met her. During the meeting, she told us about the latest news in research and OMF.

A condition OMF has when entering and funding research, is that all raw data has to be shared with other researchers. In this way, you avoid other scientists reinventing the wheel again, making the results come faster. So far, OMF has collected $6.2 million for research, and a small portion of the money comes from Sweden. During the past year, OMF funded some of the Swedish research at Uppsala University.

In the research, OMF has begun to look at the most seriously ill, 20 seriously ill have left over 1100 tests. These analyses are still ongoing but it is very clear that it is a physical disease because, among other things, they found both too high and too low values on the metabolites of ME sufferers.

Linda showed us an electronic chip that has begun to be used to test the cells on. The cells, which is placed on the chip, are startled by using salt and via a test equipment, one can clearly see the difference in the results when you compare the values of the cells that come from ME-sick people with those from healthy controls.

This is a small selection of what Linda told us. The large proceeds of the meeting, however, was this: Solution approaches, there is hope! RME follows the works OMF performs with great interest. I look forward to the next visit with Linda, which I hope will be a sooner than about 3.5 years!

To Read in Swedish: