The Gift of Hope

Today we’d like to share a #MayMomentum story of hope, resilience, & philanthropy from Swedish OMF supporter Anton. This March, Anton created a Facebook fundraiser for OMF in honor of his brother Holger’s 35th birthday, who is severely ill with Myalgic Encephalomyelitis / Chronic Fatigue Syndrome (ME / CFS). Since the kickoff of his fundraiser, Anton has already raised more than $2,000 in support of OMF-funded research. 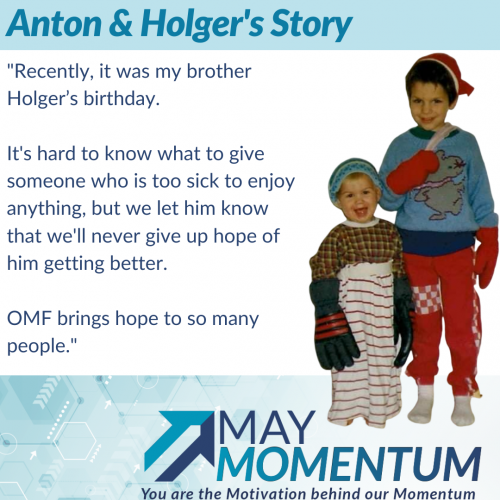 Anton explains, “This is my story about my older brother Holger. When we were children, he was the adventurous one, always bringing me on new adventures. He helped me up the rocks that were too big for me to climb, he kept my spirit up, and carried me when I got hurt. In his early twenties, he married the love of his life and the future looked bright. But since a long fever he had when he was 19 years old, something was different. As the years went by, he became more and more silent, timid, and tired. Soon he had a constant fever. He spent most of his time lying in his bed and we rarely got to see him. When we did, he couldn’t talk much.

The doctors said that he had depression that would go away, but he only got worse. Eventually, he got his correct diagnosis of ME / CFS. Soon after, he couldn’t leave his home and was confined to his bed. I only got to speak to him on the phone.

In December 2018 he came to our parents’ house to spend a few weeks during Christmas. Our family was so shocked to see the state he was in. I could never imagine that my strong big brother would be so weak and helpless. He was in such bad shape that he had to stay at my parents’ home for over a year. The holidays are the hardest. As a family, it was a nightmare trying to celebrate Christmas, Easter and Midsummer, with him lying alone in silence in the next room. There are so many moments of quality family time that he couldn’t participate in, and so many updates about my life that I couldn’t share with him. We always miss him.

He had to give up one thing after the other: eating solid food, brushing his teeth by himself, taking his medicine by himself, etc. In March of 2019, he stopped talking. The whole year was a struggle in many ways.

Recently, it was Holger’s 35th birthday. It’s hard to know what to give your brother, who can’t do anything, but we let him know that we will never give up the hope of him getting better. Open Medicine Foundation is doing an amazing job, which brings hope to so many people. That’s why I wanted to start a Facebook fundraiser to support them.

As a pastor and missionary, my life is full of many adventures that I wish I could share with Holger. If I could, I’d carry him, encourage him, and help him climb the obstacles. On my 30th birthday celebration, Holger wasn’t there. But the best gift he could give me was to let me know that he too will never give up.”

We’d like to thank Anton and his family for sharing their touching story and creating a Facebook fundraiser to help us end this devastating disease so patients like Holger may return to healthy lives and have happier future birthdays. We are grateful beyond words for the support and resilience of our incredible community.